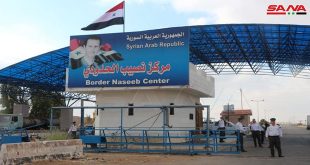 Daraa, SANA – Daraa Governor Mohammad Khaled al-Hanous said on Tuesday that the governorate is ready to cooperate with international organizations regarding medical and health aid.

During his meeting with a delegation of the International Committee of the Red Cross (ICRC), al-Hanous said the province has a good health infrastructure and the situation of hospitals and health centers is stable despite the repeated terrorist attacks made on health institutions.

He said the governorate has rehabilitated Daraa Central Hospital and it’s currently operating although at partial capacity, and that it also allocated SYP 8 million to repair 10 ambulances, adding that electricity generators have been supplied to hospitals in several areas in the province and work is underway with the Syrian Arab red Crescent (SARC) to deliver humanitarian aid to all areas in the province.

Al-Hanous said that more than 100,000 health baskets and 213,000 food baskets have been delivered to the province since August 17th, adding that these baskets were distributed to all areas, including unsafe ones, in cooperation with the SARC and the governorate.

The governor noted that there are 7 public sector hospitals in the province, four of them are still in service, in addition to 6 private hospitals, 97 health centers, 3 polyclinics, and 6 specialized centers.

For his part, ICRC Regional Delegate Thomas Thorhauge said that humanitarian organizations are working on delivering aid to all areas, which requires cooperation with the government and the SARC, calling for enhancing governmental support to the ICRC by providing sufficient data on the places which include hospitals or health centers as to increase the efficiency of delivering aid.