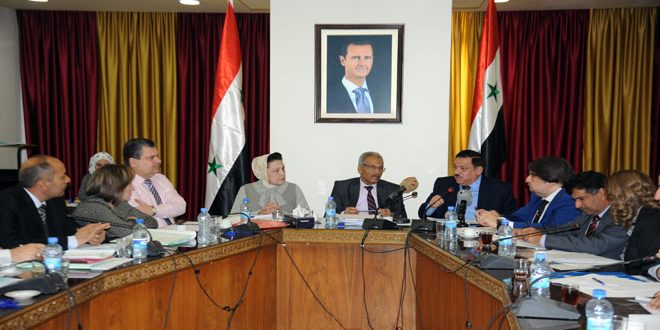 Damascus, SANA – The Budget and Accounts Committee at the People’s Assembly on Sunday discussed the Culture Ministry’s 2018 investment budget which was set at SYP 1,875 billion.

The inquires of the Committee’s members focused on the importance of activating the role of cultural centers and rehabilitating them, in addition to the need to follow up on the case of looted antiquities by armed terrorist organizations.

The also called for increasing the cinematic documentation of the events in Syria and establishing a cultural house in Aleppo.

In turn, Culture Minister Mohamed al-Ahmad affirmed that the Ministry will work on the establishment of the Museum of Art in Damascus which will be home to 17,000 of the Ministry’s old paintings.

The Committee also discussed the investment budget of the Telecommunications and Technology Ministry for the year 2018 which was set at SYP 4.658 billion.

The Committee called for finding solutions to the problem of slow-speed internet and stressed the importance of developing the work of the General Establishment of Post to guarantee competitiveness under the advanced technologies available.

The Committee members inquired about the date of putting the third mobile phone operator into service, calling for activating the phone network in the areas which the Syrian Arab Army has liberated from terrorist organizations.

He noted that the Ministry is collaborating with the Central Bank of Syria on electronic payment, indicating that this project has passed several stages already.

The minister emphasized that the Ministry is following up on the entry of the third operator with a telecommunications company of one of the friendly countries and is doing its best to restore the telephone network to the areas liberated by the Syrian army.

Later, the Committee discussed the 2018 investment budget of Public Works and Housing Ministry and its affiliated establishments which was set at SYP 27,421 billion.