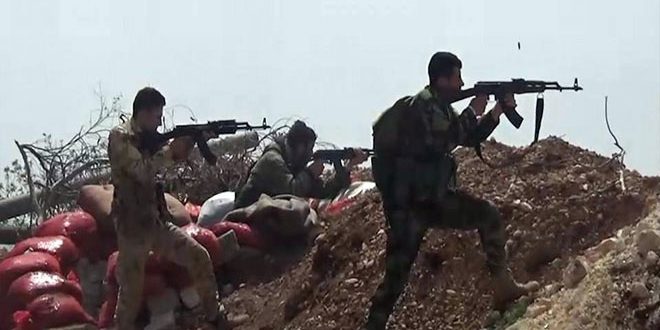 Provinces, SANA- Army units, in cooperation with the popular defense groups, foiled an attack by ISIS terrorists on the village of Aqareb al-Safyieh in the eastern countryside of Hama central province.

SANA reporter said that army units in cooperation with the popular defense groups, engaged on Thursday in fierce clashes with ISIS-affiliated terrorist groups that infiltrated from the southern direction of Aqareb Safyieh village in the eastern countryside of Salamyieh.

The reporter added that the infiltration attempt was foiled and a number of ISIS terrorists were killed and others were injured and an amount of their arms and ammunition was destroyed.

A military source told SANA that the army units launched intensive strikes against ISIS terrorists’ hideouts and positions in Um al-Rumman area and Sad al-Qaryatain in the southeastern countryside of Homs province, inflicting heavy losses upon the terrorists in personnel and weaponry.

The source added that an army unit eliminated in a special operation a number of ISIS terrorists and destroyed a vehicle for them that was moving towards al-Alianiyeh village.

At least 17 ISIS terrorists were killed during the Syrian Arab Army’s continuous operations in Deir Ezzor city on Thursday.

The military source said army units targeted Thursday morning ISIS terrorists’ positions and supply routes in the surroundings of the graveyards area on the southern outskirts of Deir Ezzor city, killing 9 terrorists and destroying a vehicle and a machinegun base.

The terrorist Hamzeh al-Ismael and Zakarya al-Arab, both are leaders within ISIS terrorist organization, were identified among the dead.

The source added that the army units destroyed a number of sites where ISIS terrorists were fortified in al-Thurda and al-Rabi’yat areas south of the city.

SANA reporter confirmed the death of the terrorist Abdul Hai Mohammad al-Khalid, who is the most prominent ISIS security officials from al-Shehil area, along with seven of his companions in Buqrus village in the eastern countryside of Deir Ezzor province.

Local sources said that the ISIS terrorist organization committed a new crime against al-Boukamal locals, where the group’s members executed 4 brothers of al-Rawi family, in addition to killing a woman in Ghariba village east of Deir Ezzor.