2289 persons, including 1058 militants, evacuated from al-Qaboun neighborhood in Damascus 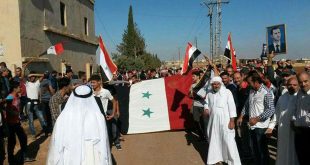 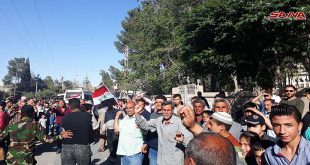 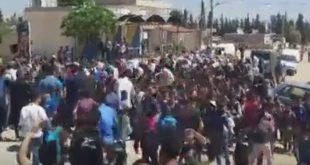 Damascus, SANA – The first phase of the settlement agreement in al-Qaboun neighborhood, which is located in the eastern outskirts of Damascus city, was completed on Sunday with the evacuation of 2289 persons, including 1058 militants, according to Damascus Governor Bishr al-Sabban.

Earlier, SANA’s reporter said a number of vehicles started leaving al-Qaboun neighborhood at dawn on Sunday transporting hundreds of militants in a new step towards ending all armed manifestations in the neighborhood, which the terrorist organizations have used as a springboard to attack neighboring areas for over 4 years.

The evacuation of militants started 16 hours after military operations were suspended in the neighborhood following weeks of fierce battles between the units of the Syrian Arab Army and the terrorist organizations which finally accepted the reconciliation agreement at noon on Saturday.

The reporter noted that many of the militants will be evacuated to Idleb, while others will have their legal status settled according to the laws and regulations in place.

The terrorist organizations in the neighborhood surrendered after the Syrian Arab Army seized a strategic tunnel connecting al-Qaboun with Erbin in the Eastern Ghouta, as this tunnel was the last one linking the Ghouta with the western part of the Damascus-Homs highway.