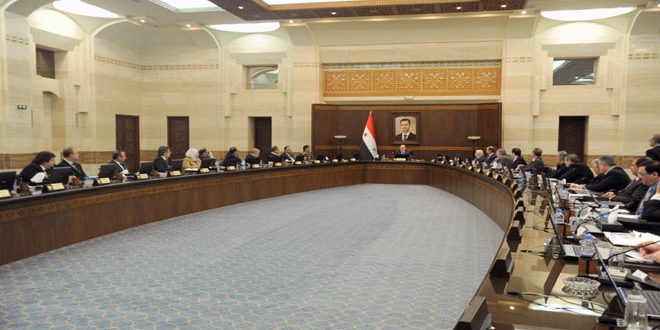 Damascus, SANA – The Cabinet approved a bill on exempting businessmen from interests and fines due to the General Establishment of Social Securities to alleviate their burdens and encourage them to pay due fees and resume production.

During its weekly session on Tuesday chaired by Prime Minister Imad Khamis, the Cabinet decided to allow industrialists to import petroleum products necessary for production directly, instructing the Petroleum and Mineral Resources Ministry and the Economy and Foreign Trade Ministry to set up the guidelines for this.

Based on the recommendations of the Reconstruction Committee, the Cabinet allocated SYP 1 billion for the reconstruction of infrastructure in Daraya town, which will go towards rehabilitating the city council, electric power substations, water networks, sewage, roads, clearing debris, and conducting assorted maintenance efforts.

The Cabinet also approved a new mechanism from the Planning and International Cooperation Agency on preparing the state general budget, in addition to reviewing the work of the Military Housing Establishment.

During the session, Local Administration and Environment Minister Hussein Makhlouf reviewed the Ministry’s work during the past six months, noting that its plan involves expanding work in the “My Project” initiative and helping to revitalize work in industrial and vocational zones and cities.