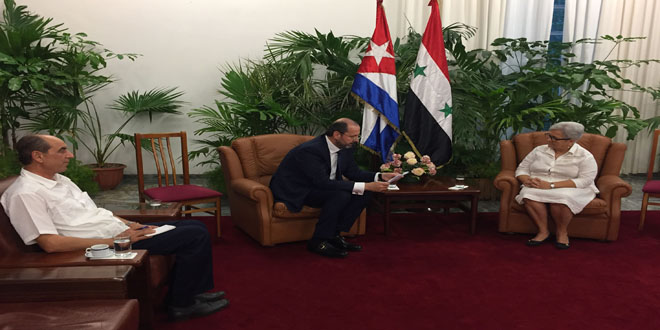 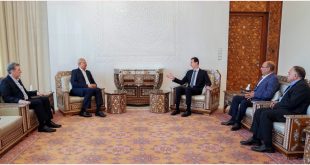 Havana, SANA – Vice President of the Council of State and Comptroller General of Cuba, Gladys Bejerano, expressed thanks and appreciation of President Bashar al-Assad’s sincere condolences on the death of the Cuban Leader Fidel Castro.

Her appreciation was voiced during a meeting with Minister of Presidential Affairs Mansour Azzam, who was commissioned by President al-Assad to visit Cuba and offer condolences in person to Cuban President Raul Castro. Azzam participated in the central funeral ceremony that was held on Tuesday.

Bejerano stressed that Havana will continue to support Damascus and its just cause, clarifying that Cuba realizes the scale of conspiracy hatched against Syria and feels sorry for what is happening in it.

For his part, Azzam said the thoughts and steadfastness of Fidel Castro will remain forever an inspiration for the Cuban people and all free peoples struggling to maintain their dignity, sovereignty and independence.