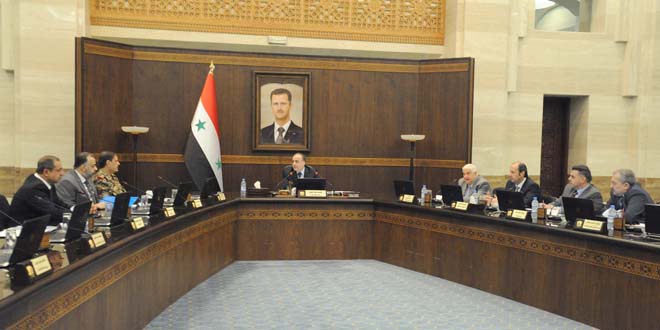 Damascus, SANA – The Cabinet discussed in its weekly session chaired by Prime Minister Imad Khamis on Tuesday the work mechanism of vocational unions and federations that have economic and services aspects.

The Cabinet discussed the role of those unions and federations in light of the current circumstances in Syria and how to address issues that affect their performance.

The Cabinet then established a committee to follow up on the rehabilitation of infrastructure and services in Daraya in preparation for the return of its locals to their homes, in addition to approving two draft decrees on regulating universities and amending the executive list of the law regulating universities issued in 2006.

Among the items the draft decrees introduced are allowing faculty members to teach in private universities on weekends and one day per week, increasing the seats dedicated to children of martyrs in universities, and raising the retirement age for some posts in the faculty and staff.

The Cabinet approved a bill amending an item in the communications law for 2010 on extending the exclusivity of the services provided by Syrian Telecom for five years, in addition to extending decree no.40 for 2014 on permitting public establishments to procure their needs without being restricted by rules and regulations for six months.

The Cabinet also discussed amending the fees for exiting border crossings for individuals and vehicles.

Earlier today, Premier Khamis issued a decision assigning Haitham Munir Mnaini the post of Director General of the General Organization of Remote Sensing and ending the assignment of Usama Mahmoud Ammar for the aforementioned post.