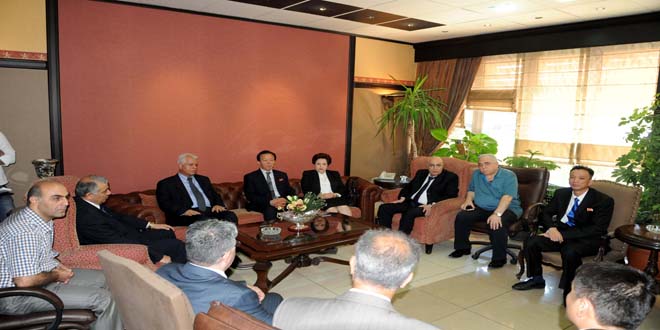 The visit came on the occasion of the 50th anniversary of establishing diplomatic relations between Syria and the DPRK and in the framework of strengthening these relations in the common interest of both countries and peoples.

In a press statement during a tour in the hospital’s departments, the Ambassador affirmed his country’s readiness to offer support and aid to the health sector in Syria, hailing the medical services provided by al-Assad University Hospital which offers an evidence of “the the Syrian government’s just health policy and commitment to provide free treatment to all citizens despite the difficult economic conditions under the current crisis”.

The DPRK Ambassador described the bilateral friendly relations between Syria and DPRK as “historical and exemplary” compared to the relations between countries in the world, noting that these relations are being developed and enhanced under the two countries’ leaderships.

Al-Assad University Hospital, which was opened in Damascus city in 1988, is considered one of the most important educational hospitals affiliated to the Higher Education Ministry in the country. It provides advanced medical and surgical services to patients. It also organized medical courses for medicine students, graduates and doctors.