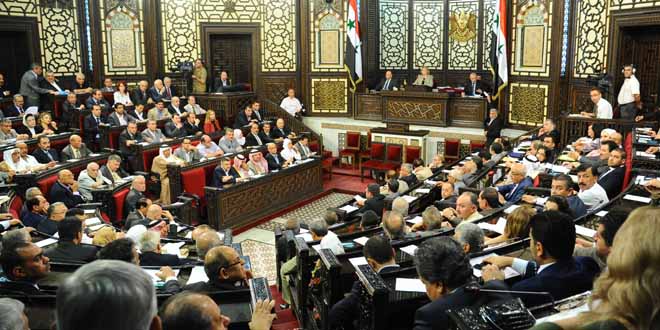 Damascus, SANA- The People’s Assembly continued on Tuesday its fourth session for the first ordinary round of the second legislative term, headed by Speaker Hadiyeh Abbas.

Assembly members addressed services and livelihood issues, the most notable among being securing necessary medicine to meet the needs of Hasaka province, rescheduling agricultural loans, and tightening control on the markets.

Assembly members agreed to task the Committee of Constitutional and Legislative affairs with preparing the necessary amendments to the articles of the rules of procedure of the Assembly for discussion and approval.

Speaker Abbas called on Assembly members to exert extraordinary efforts at this stage to follow up on citizens’ issues.

She also called for creating a committee to address the infractions in the distribution of fuel and basic supplies in Aleppo city, affirming the Assembly’s keenness to monitor services and urgent affairs and the problems arising from the terrorist attacks on the city during the past few days.