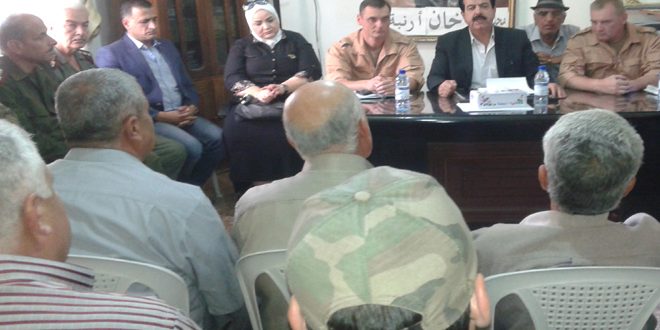 Quneitra, SANA – The social, political, civil and religious figures in Khan Arnaba town in Quneitra province signed on Sunday a document of pledge vowing loyalty and commitment to the national reconciliation.

The signing ceremony was attended by Quneitra Governor Ahmad Sheikh Abdul-Qader and Sergey Ivanov, Head of the Russian center monitoring the cessation of hostilities agreement in the country .

During the signing, the signatory figures affirmed their support to the Syrian Arab Army in its fight against Takfiri terrorism and stressed their adherence to the national principles.

They called for accelerating the process of settling the legal status of wanted persons from the town so as they can get back to their normal lives.

Hana al-Sayyed, chairwoman of the National Reconciliation Subcommittee in the southern Quneitra province, said the efforts made by all the parties concerned to achieve the reconciliation in Khan Arnaba town are being successful, pointing out that the town has offered nearly 112 of its people as martyrs who defended the homeland alongside the Syrian army.

Efforts at achieving local reconciliation in Khan Arnaba are part of a wider context including the entire southern region of Quneitra. A meetign for the purpose was held on May 10th.