Nasrallah: The blood of our martyrs who fell in Syria motivates us to have a bigger presence in the battle 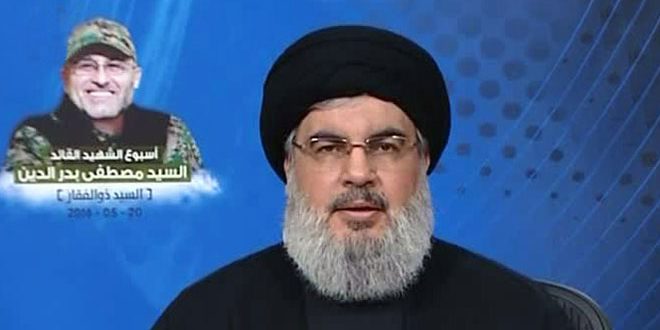 Beirut, SANA – Secretary General of Lebanon’s Hezbollah, Sayyed Hassan Nasrallah, said that the decision of the Lebanese resistance to enter the battle in Syria was for the sake of defending Lebanon, Palestine, the entirety of the Arab nation, and the resistance axis.

In a speech on Friday during an event to mark the passing of one week since the passing of martyr Mustafa Badreddin, Nasrallah warned the Israelis that if they target any member of the resistance, then Hezbollah’s response will be uncompromising and will be outside Sheb’a farms, regardless of consequences.

Nasrallah spoke highly of the achievements of the later Badreddin, aka “Zul’fiqar” who used to run the resistance’s operations against terrorist organizations in Syria, in addition to playing a major role in dismantling the Israeli agents network and terrorist networks that planned bombings in Lebanon.

He said that data confirms that Takfiri terrorist organizations are responsible for the death of Badreddin, noting that when information indicates that Israel is responsible, then Hezbollah doesn’t hide such information and doesn’t lie, even for the sake of psychological warfare.

Nasrallah said the martyrdom of Badreddin and the blood of other martyrs only motivates the resistance to have a bigger presence in Syria due to the resistance’s belief in the righteousness of the battle there and due to its conviction that victory is almost at hand, adding that the resistance will be present in various forms and finish the battle, because it believes that its efforts and sacrifices will foil the Takfiri project concocted by the US and Israel.

“We went to the battle in Syria based on a clear analysis and estimation of the dangers and threats, and each day facts are being revealed and the goals of the battle become apparent along with the role of the Americans, the West, and their regional allies in it, and who exploited terrorist organizations and funded, mustered, armed, equipped, trained, and managed them and facilitated their arrival from all over the world to Syria,” he said.

Nasrallah noted that the Western and American media outlets are now acknowledging how preparations for what is happening in Syria began because they’re looking for solutions to the disastrous events they planned on the region only to have these events affect them, citing as an example the acknowledgement by US Vice President Joe Biden that Saudi Arabia and other states spent billions of dollars on terrorists in Syria and sent them thousands of tons of weapons.

“Everyone knows that the Al Saud regime carries out media and sectarian instigation, funds, arms, and brings terrorists from around the world to Syria and then manages them via an operation room in Jordan, in addition to running the so-called Riyadh delegation,” he added, asserting that the Saudi regime is both fighting on the ground and sabotaging political efforts.

He went on to say that the information and confessions that are surfacing now prove that Syria was targeted for being independent from US hegemony and its tools in the region, and for its commitment to pan-Arab stances, for opposing the Israeli project in Palestine and occupied Arab lands, and for supporting the resistance in Lebanon and Palestine.

Nasrallah said that after the failure of the US along with Israel in direct methods, they exploited ISIS and Jabhat al-Nusra and other terror groups to fight the resistance axis, while at the same time they attempt to pass themselves off as protectors of the region’s peoples and use these terror groups as an excuse to have a military presence in the region and enter Syria.