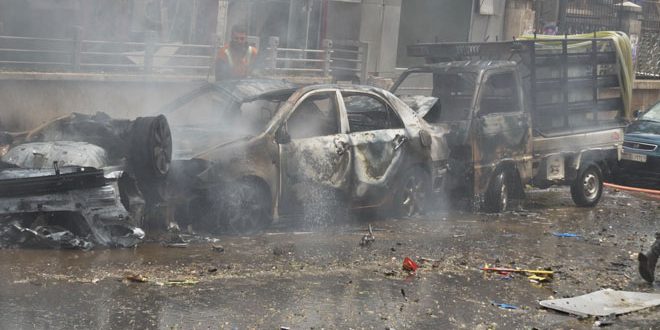 Aleppo, SANA- Three civilians were killed and five others were injured when Jabhat al-Nusra terrorists and other terrorist organizations affiliated to it fired rocket shells on residential neighborhoods on Aleppo.

A source at Aleppo’s police command said in a statement to SANA reporter that terrorists fired on Wednesday at dawn a number of rocket shells on Salah-Eddin and al-Khalediyeh neighborhoods, killing three civilians from the same family, injuring a fourth and causing material damage to private and public properties.

On Tuesday, 17 civilians were killed and 68 others were injured due to the terrorist attacks with rocket shells by Jabhat al-Nusra and other terrorist groups on al-Dhabeet Hospital and residential neighborhoods in Aleppo.