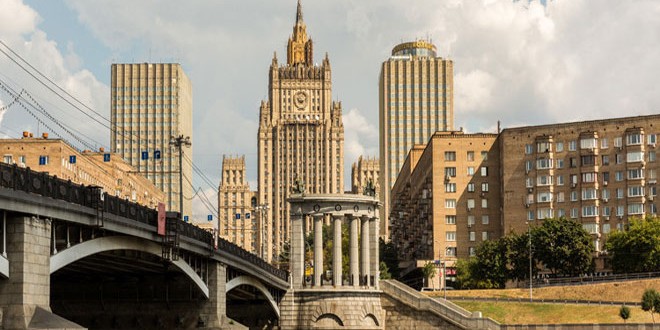 Moscow/Tokyo, SANA – The Russian Foreign Ministry said that there’s an increase in the flow of weapons and munitions smuggled to terrorist organizations in Syria through the Turkish borders.

In a statement on Friday, the Ministry said that available data shows that around 8,000 gunmen from Jabhat al-Nusra are positioned southwest of Aleppo city and around 1,500 more are positioned north of the city, noting that armed groups haven’t stopped shelling the northern neighborhoods of Sheikh Maqsoud and al-Zahraa in Aleppo city, and are still attacking Handarat Camp, adding that if these actions don’t stop, civilians in northern Syria will once again fall under siege.

The statement said that the talk which was leaked about arming the so-called opposition to implement the American “plan B” is unacceptable, voicing concern over the use of chemical weapons by fighters in Aleppo.

The Ministry also asserted that the Russian Aerospace Forces have no intention of launching an attack on Aleppo city in Syria, and affirmed its support for involving Kurds in intra-Syrian talks in Geneva.

Earlier in the day, Russian Foreign Minister Sergey Lavrov called for deploying international observers at Turkey’s borders with Syria to monitor the situation and stop the flow of terrorists and weapons from Turkey to Syria.

In a joint press conference with Japanese counterpart Fumio Kishida in Tokyo on Friday, Lavrov drew attention to the problem of ‘holes’ on the Turkish borders through which gunmen and weapons get into Syria.

“There are ‘holes’ on the Turkish borders through which gunmen and weapons get into Syria, while going in the opposite direction is a flow of different contraband,” he said, adding “we are regularly posing this question to all our partners who are interested in the settlement of the crisis in Syria, including to Americans as Turkey is a member of the US-led anti-terrorist coalition.”

Lavrov went on to say that “US representatives assure us that they are also concerned about the borders problem and work with Ankara to solve it… We propose, so far not in any official format but as a draft resolution or some other decision, that Turkey invites independent international observers to its territory to watch what is going on these borders in reality.

The Minister said it’s clear that international observers can be deployed only at the invitation of Turkey, adding “we are pinpointing the issue, including in the United Nations, in the hope that Western allies will put pressure on Ankara and will get a concrete answer from it.”

Lavrov, Kerry reiterate support for cessation of hostilities in Syria

On a relevant note, Lavrov and US Secretary of State John Kerry voiced in a phone call on Friday evening their commitment to supporting the cessation of hostilities agreement in Syria with the exception of fighting terrorist groups.

During the call, which was initiated by the US side, Lavrov and Kerry called on sides in Syria to work to improve the humanitarian situation in the country.