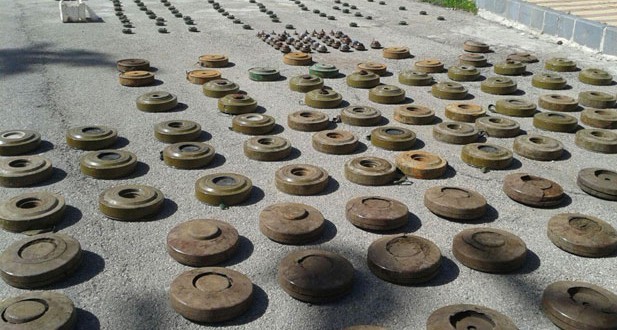 Aleppo/Hasaka, SANA-Five civilians were killed, others were injured in terrorist attacks with mortar and rocket shells on al-Sheikh Maqsoud neighborhood in Aleppo city on Monday.

On Sunday, 13 civilians were killed and more than 40 others were injured in mortar and rocket attacks by terrorists who targeted al-Sheikh Maqsoud neighborhood in Aleppo city.

Earlier, a women was killed and three persons were injured when a landmine left behind by ISIS terrorists in the countryside of the northeastern Hasaka province exploded.

A source at Hasaka Police Command said in a statement to SANA on Monday that a landmine planted by ISIS terrorists in al- Nofaliyeh village southwest of Hasaka city exploded, leaving one woman dead and injuring three persons, two youths and a woman.

Later, the source reported that terrorists detonated a sound bomb near al-Kendi Park in the center of Qamishli city, inflicting injuries of moderate severity on on person.

Meanwhile, 8 citizens, among them two children, were killed and 5 others were wounded in a terrorist attack with mortars by ISIS on many neighborhoods in Deir Ezzor.

A source in Deir Ezzor told SANA that ISIS terrorists fired many mortar shells on the neighborhoods of al-Joura and al-Qusur, killing 8 persons and injuring 5 others.

On Sunday, two children were injured in when a landmine and a bomb exploded in al-Homar al-Sharqiyeh village and al-Shaddadi city in Hasaka province.