A civilian killed, others injured in terrorist attacks on Aleppo and Damascus 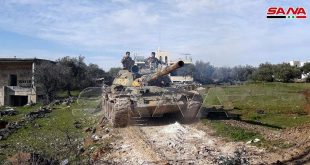 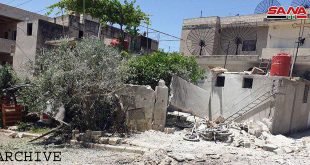 Aleppo/ Damascus, SANA- A civilian was killed and 11 others were injured in a terrorist attack on al-Mocambo neighborhood in Aleppo city.

A source in the province said that rocket shells fired by terrorists from Bani Zeid area fell on al-Mokambo residential neighborhood, killing a civilian and injuring 11 others who were taken to Aleppo University Hospital.

The shells caused material damage to public and private properties, the source added.

Terrorist from the so-called Jaish al-Mujahideen, Shohadaa Badr brigade, al-Islam brigade and Ahrar al-Sham movement are active in a number of Aleppo neighborhoods and target residential areas with shells.

In Damascus, nine civilians were injured in terrorist attacks with rocket and mortar shells fired by terrorists in Jubar on residential neighborhoods on Sunday.

A man and a woman were severely injured when a shell fell on al-Adawi area while another civilian was injured by shrapnel of a shell that fell in Bab Touma neighborhood.
Another shell fell on the building of Faculty of Architecture, injuring two students in addition to causing material damage to the building.
A house and a butcher shop were damaged when two shells fell in Rukn al-Deen neighborhood.

A civilian was killed and three others were injured in a terrorist attack on Bab Touma on Saturday.