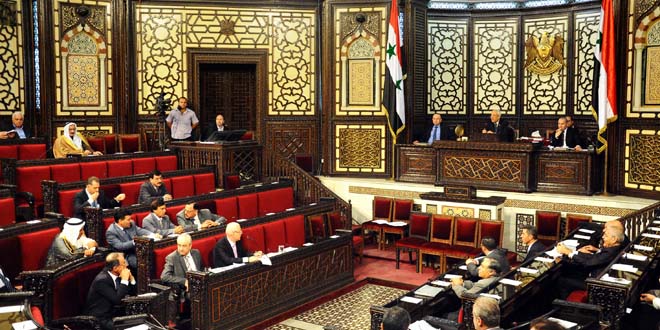 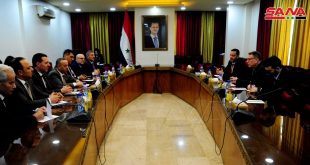 Damascus, SANA – The People’s Assembly on Monday discussed the performance of the Petroleum and Mineral Resources Ministry in light of the current crisis in Syria and the Ministry’s efforts to provide petroleum products during winter.

Discussions during the session focused on the need to provide Aleppo and Daraa provinces with their fuel needs, rehabilitating oil fields that have been secured, speeding up the distribution of heating fuel before winter, monitoring distribution, and providing more fuel for power plants to reduce power rationing hours.

In response to the Assembly members, queries and comments, Petroleum Minister Sleiman al-Abbas said that the situation of petroleum products is acceptable, and is due to improve soon, noting that the current petroleum production output is around 10,000 barrels per day, while gas is around 12 million cubic meters, with the possibility of producing 2 million more via al-Shaer field in Homs as soon as the security conditions there improve.

Al-Abbas said the Ministry is providing the Electricity Ministry with around 4,000 tons of fuel per day and 12 million cubic meters of gas, noting that the heating fuel allocated for Aleppo province has been increased recently.

He added that the importation and purchase of petroleum products is done exclusively via the petroleum marketing bureau at the Cabinet, noting that last year’s experiment of allowing the private sector to import such products has been a failure.

The Minister also said that a memo of understanding has been signed to open 10 new gas stations in Damascus city to join the existing 18 stations, with 4 of the new stations having already been opened while the remaining 6 are being prepared, adding that new gas stations can be opened in other provinces as soon as suitable locations are provided.