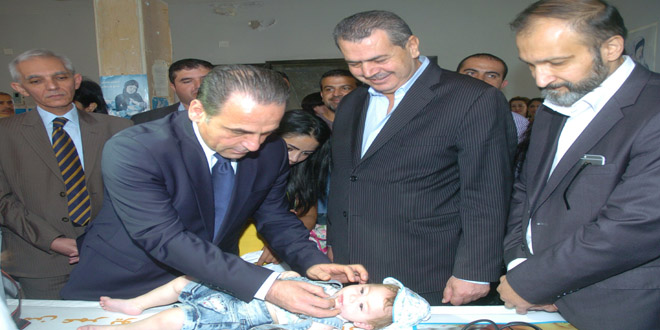 Damascus, SANA – Health Ministry, in cooperation with the World Health Organization (WHO) and the UN Children’s Fund (UNICEF), launched Sunday a new polio vaccination campaign for all children under five years all over the country.

The new national campaign targets about 3 million children under five regardless of their previous vaccines.

In a statement to SANA in Sweida city, Health Minister Nizar Yazigi asserted that the Ministry has taken all required procedures to make the campaign a success which will last for a week to ensure vaccinating all the targeted children.

He added that 9316 health workers, 863 vehicles and 1332 mobile teams are engaged in the campaign.
The Minister called on parents to take their children to health centers or a nearby mobile team to be vaccinated regardless of the previous vaccines that the children took earlier.

Yazigi renewed that the vaccines are given free of charge and are of high quality matching WHO standards.

As for the difficult-to-reach areas, the Minister said the ministry is cooperating with the WHO, the UNICEF, the Syrian Arab Red Crescent (SARC) and the International Committee of the Red Cross (ICRC) to deliver vaccines to all those areas.

He noted that the Ministry has been able to successfully confront polio through successive vaccination campaigns that have helped stop the disease spread, stressing that no new cases of polio have been detected in Syria since January 21 of 2014.

Haidar Nasser of the UNICEF Health Program told SANA reporter that the organization has supported the campaign through providing vaccines and training medical staff.

He noted that this is the 16th campaign to be held in Syria since 2013 with the aim to have Syria freed of polio.

The latest national polio vaccination campaign was conducted on May 31st and lasted for five days and covered health centers, makeshift residential centers and through mobile teams in various provinces.