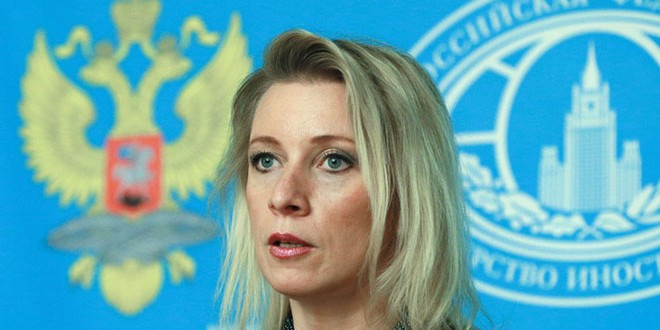 Moscow, SANA – Spokeswoman of the Russian Ministry of Foreign Affairs Maria Zakharova stressed that Russia is supporting the Syrian state in facing terrorism, and that the situation in Syria is developing dynamically as Russian aircrafts strike terrorist sites, prompting foreign terrorists to flee the country.

In a press conference on Wednesday, Zakharova criticized the Western logic which claims that if President al-Assad were to step down then terrorist operations in Syria would stop immediately, adding that this logic is in fact a call for acquiescing to the demands of international terrorism.

She addressed the issue of the U.S. weapons which were airdropped in Hasaka province and were allegedly sent to groups purportedly prepared to fight ISIS, wondering where these weapons will end up and what the results of such actions will be.

The spokeswoman also reiterated her country’s condemnation of the terrorist mortar attack on the Russian Embassy in Damascus on Tuesday, saying this attack was prompted by the propaganda campaign waged against Russia by malicious media outlets that broadcast false reports that lack any credibility and deal in double standards.

Zakharova said that Russia is communicating with the Syrian state and all other sides in order to reach a political settlement based on the Geneva communiqué, adding that the so-called “coalition” has lost all credibility after it rejected the calls of UN Special Envoy on Syria Staffan de Mistsura to take part in the work of the four committees to resolve the crisis.

Over the large numbers of Toyota vehicles in the possession of the ISIS and how the terrorists managed to purchase them, Zakharova said these cars were supplied by the US and its allies including Britain under the pretext of “supporting the opposition.”