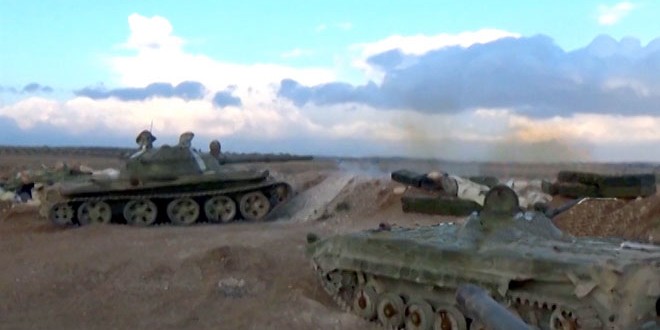 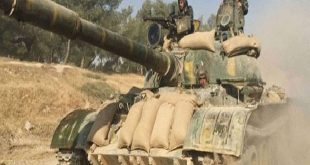 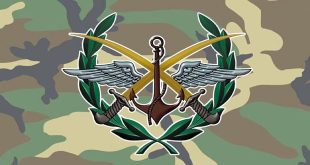 Damascus, SANA- Russia’s Air Force, in cooperation with the Syrian Air Force, carried out 55 sorties in the past 24 hours during which 53 targets for ISIS terrorist organization were destroyed in several provinces, according to a Syrian military source and the Russian Defense Ministry.

The Syrian military source said in a statement to SANA on Monday that the sorties resulted in destroying 25 fortified positions containing arms, munitions and a command center for terrorists in the surrounding of Salma town in Lattakia countryside.

A camp containing 1,200 terrorists near al- Mastumeh town was targeted in Idleb countryside.

In addition, a bomb shelter and a number of vehicles including fuel tanks, trailers, two jeeps equipped with heavy machineguns, and three vehicles loaded with ammunition were destroyed in the surrounding of Tal Skeik and Skeik town in the northern country side of Hama.

The Ministry said Su-34 bombers targeted a camp for terrorists located near al-Mastumeh, and according to the reconnaissance data, the camp was used as a concentration point, where militants from different countries were trained, and taught special tactics and sapper skills under the leadership of experienced instructors.

In the recent days, terrorists are undertaking desperate attempts to ferry munitions, armament, fuel, and equipment from Raqqa province to the contact line with the Syrian Army and Armed Forces, the ministry said, adding that significant parts of their armament, ammunitions, and fuel for military vehicles were already eliminated by pinpoint strikes of the Russian aircrafts.

The Russian Defense Ministry pointed out that according to the Treaty on Open Skies, the Russian specialists have to carry out a scheduled observation flight on an An-30B aircraft over the territories of Turkey on October 12, but Turkey has applied a request to the Russian Ministry of Defense to defer the flight to a later.

Since September 30th, Russia’s Air Force carried out air strikes as part of the agreement between Syria and Russia. Sorties on Sunday destroyed 53 fortified positions, a command center, and seven ammunition depots for terrorist organizations in Hama, Lattakia, Idleb and Raqqa.