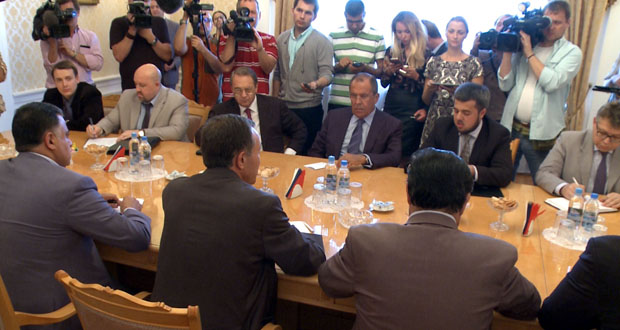 Moscow, SANA – Russian Foreign Minister Sergey Lavrov on Friday reiterated calls for uniting efforts to combat terrorism and reach a political solution for the crisis in Syria based on the results of the 2012 Geneva conference.

Meeting figures from the Syrian opposition, Lavrov said that Russia considers the situation in the Middle East and in Syria unacceptable, stressing the need for a political solution for the crisis in order to guarantee the future of Syria as a unified, independent, and inclusive state.

He said that Russia is working to unite the different sides of the Syrian opposition and is keeping in touch with regional and international sides in order to create suitable condition for pursuing the political process.

On a relevant note, Russian Deputy Foreign Minister Mikhail Bogdanov discussed with Syria’s Ambassador in Moscow Riyad Haddad developments in Syria, with the two sides focusing on the need to unite regional and international efforts to confront the terrorism of ISIS and other extremist organizations.

Bogdanov also briefed Haddad on the progress of the talks currently being held in Moscow with representatives of the various Syrian opposition groups.