Locals of Hadar, Jabal al-Sheikh villages reiterate loyalty to homeland and its army 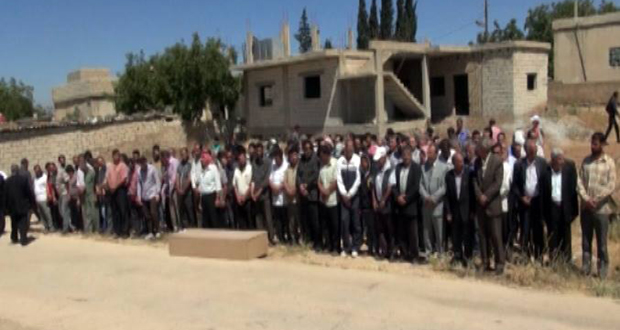 Quneitra, SANA – Locals of Hadar town in Quneitra province rejected all misinformation campaign targeting their village, stressing that their adherence to the homeland is unshakable.

The village has shown unrelenting steadfastness in the face of repeated attempts of infiltration by mercenary terrorists recently, who were repelled by the army units and the popular defense groups.

“We, the residents of Hadar-all elderly people, youth, children and women- announce that we are Arab Syrians,” the locals said in a statement issued on Sunday. They added that the Israeli Zionist enemy and “some of its agents” stand behind the disinformation campaign targeting their village, which they affirmed “will not shake our steadfastness and adherence to our homeland, army and leadership.”

“We will not change our position no matter how great the sacrifices are,” they said, renewing their pledge of loyalty to the leadership of President Bashar al-Assad and the Syrian Arab Army.

A similar statement issued yesterday asserted that the locals of Hadar will oppose any “project aimed at cutting them off from their identity and homeland.”

Likewise, people of Jabal al-Sheikh villages issues a statement in which they expressed their support to the Syrian army in face of terrorism and its supporters, adding that they have been and will always remain inseparable segment of the Syrian people and they will confront all interference attempts by external sides.

They expressed their pride in their nationality and loyalty to leader of the Syrian revolution Sultan Basha al-Atrash and late President Hafez al-Assad, expressing their absolute support to the Syrian army and leadership of President Bashar al-Assad.