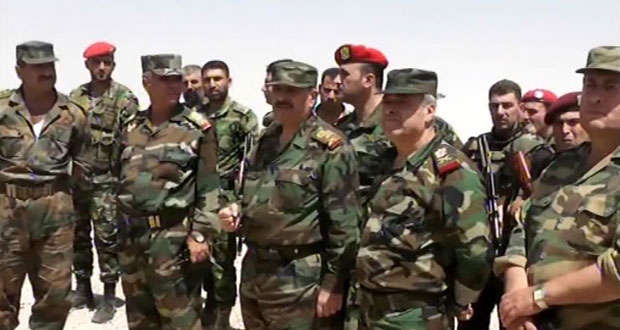 Damascus, SANA-Upon the directives of President Bashar al-Assad, Commander-in chief of the army and armed forces, Defense Minister Fahd Jasem al-Freij visited on Wednesday a number of army units in Homs eastern countryside, inspecting their situation and conditions of their tasks. “Syria will defeat Takfiri terrorists by the heroism of our army soldiers who offer precious sacrifices to preserve the Homeland’s dignity and honor,” Major General Freij, also Deputy Commander-in chief of the army, told the army members during the visit.

He underlined that the Syrians are determined in their war against terrorism, saying “the armed forces will remain at a high moral spirit and combatant readiness to defeat terrorism and its supporters.”

Major General Freij appreciated the big efforts exerted by the army soldiers and officers who work, day and night, to pursue terrorists and eliminate them.

For their part, the army soldiers affirmed their readiness to confront all forms of terrorism and defeat it to restore security and stability to Syria.