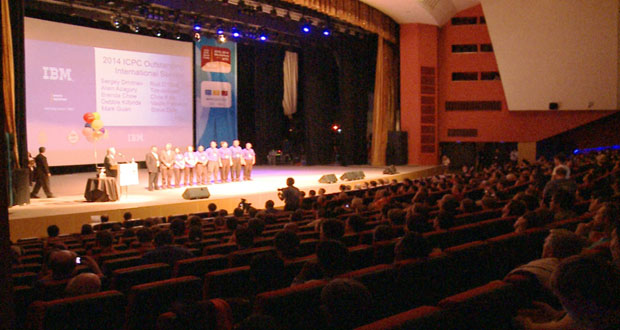 Moscow, SANA – The 2014 ACM International Collegiate Programming Contest World Finals kicked off on Tuesday in Yekaterinburg city in Russia with the participation of 120 teams worldwide, including a team from Tishreen University of Syria.

The event started with music and artistic shows and speeches made by Russian officials on the city and the history of the international competition.

On the sidelines of the event, Dr. Jaafar al-Khair, head of the Syrian team, told SANA reporter that the contest is the most important and strong event worldwide, adding that the sponsoring, participating and hosting companies indicate the cutting-edge level of the contest.

He said that Syria’s participation is of great importance specially that the country is facing a global terrorist war that aims at obliterating the Syrian cultural heritage and identity, adding that the preparation of the Syrian team is by far better that the last year, hoping that the team will make good results.

The National Collegiate Programming Contest was first held in Lattakia province in 2011. Several local contests were held Tishreen and al-Baath universities, based in Lattakia and Homs, respectively.

Local contests at universities qualify for the National Collegiate Programming Contest, which in turn qualifies for contests on the regional and international levels.

The Syrian Computer Society has been the primary sponsor of the Contest since its inception, which has become an annual event. Tishreen University and Syriatel Telecommunications Company are co-sponsors.