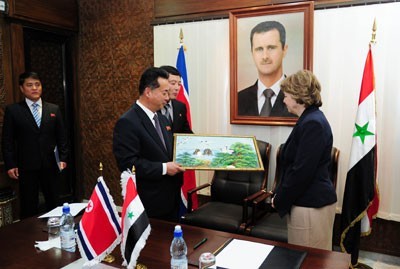 Damascus, (SANA) The Syrian-DPRK Joint Economic Committee concluded its works Thursday, signing the minutes of the meeting of its ninth session that included agreements and executive programs.

The signed agreements cover the spheres of industry and the scientific and technical cooperation in the fields of specifications, standards and quality control, in addition to media.

The minutes of the meeting, held at the Ministry of Culture, also included signing a memo of understanding in the field of industry between Ministry of Industry and DPRK Trade Ministry, an executive program for implementing the items of the agreement on scientific and technical cooperation.

The minutes also comprised signing a memo of understanding between the General Establishment of Radio and TV and the DPRK Central Radio Committee and the protocol agenda of the ninth joint committee.

The protocol sums up all what was agreed by the committee’s ninth session in the areas of trade, investment, customs, banking, industry, specifications and quality control, agriculture, education, transport, communications, technology, oil and mineral resources, tourism, environment, electricity, housing, sport, culture and media.

The set of agreements also included a proportionate allotment agreement between the Syrian Arab Airlines and Democratic Korea’s Air Koryo Company, which was prepared by the Syrian side and is yet to be signed by the Korean side.

Minister of Culture Lubaneh Mshaweh, the head of the committee on the Syrian side, noted that Syria and the DPRK have been suffering from similar unjust economic siege, which she added necessitates utilizing expertise in both countries to stand their ground in the face of the blockade.

She invited the Democratic Korean companies and businessmen to come to Syria and make use of the prolific investment opportunities in coming reconstruction stage, particularly in the fields of electricity, oil, industry and housing. For his part, DPRK Minister of Foreign Trade Ri Ryong Nam, who chaired the committee on his country’s side, affirmed that all capabilities are abundant for cooperation with Syria in the various fields, stressing readiness to contribute to activating the signed agreements.