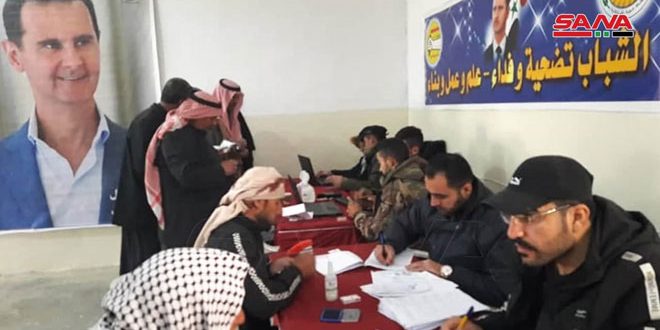 Deir Ezzor, SANA- The process of settling the status of the wanted civilians, military deserts and those who have evaded the compulsory and reserve military service started in al-Bokmal City in Deir Ezzor southeastern countryside in framework of the comprehensive settlement process launched in the province.

A number of the tribes’ dignitaries and elders, in statements to SANA, affirmed that this settlement is a is a great and unprecedented occasion in terms of its comprehensiveness and its positive impact on the consolidation of security and safety in the region.

Meanwhile, a number of those who had their status settled, hailed the simplified procedures during the settlement process.

The authorities concerned have settled the status of more than 11,000 citizens since the settlement process was launched on the fourteenth of last month.

The settlement process continues in the coming days at al-Bokmal Center to allow those wishing to settle their status to join it.

Comprehensive settlement process continues in Deir Ezzor 2021-12-08
ruaa-jazaeri
Share
Previous Do you know that novelist Agatha Christie was in Syria when she wrote (Murder on the Orient Express)?
Next Moscow: The West adopts unilateral sanctions against any state that pursues sovereign policy