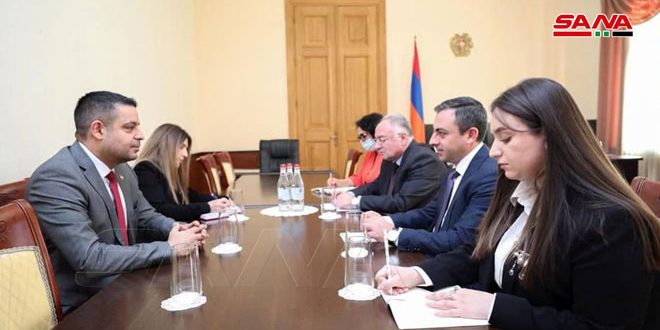 Yerevan, SANA- Vice president of the National Assembly of Armenia, Ishkhan Vachiki Saghatelyan, affirmed that Syria has overcome difficulties thanks to its leadership and the will of its people, referring to the Turkish destabilizing role through violating the territorial integrity and sovereignty countries of the region.

He stressed the importance of parliamentary diplomacy and cooperation between Armenia and Syria at international forums, expressing willingness to support the implementation of initiatives aimed at enhancing bilateral relations in different fields

For his part, Ambassador Haj Ibrahim described as brotherly and strong the relations between Syria and Armenia, referring to the importance of developing parliamentary and economic relations between the two countries.