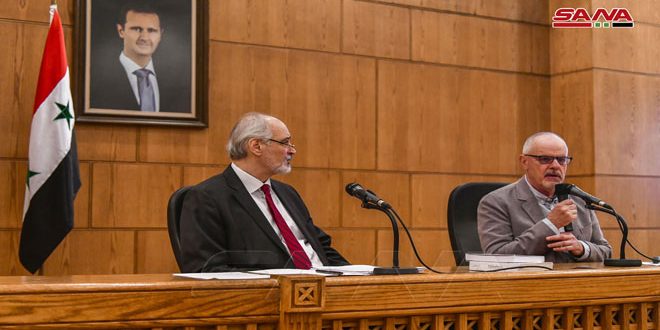 Damascus, SANA –  Foreign and Expatriates ministry’s diplomatic institute on Monday held a presentation for Australian writer and  activist at University of Sydney, Professor Tim Anderson, about his books “the Dirty War on Syria”, and “Axis of Resistance: towards an independent Middle East”. Deputy Foreign and Expatriates Minister , Bashar al-Jaafari attended the event. Al-Jaafari said that the support offered by professor Anderson to Syria has not been limited to the duration of the terrorist  war that started since 2011 until now , but, during this stage, he was one of the first activists who warned against being driven behind  idioms like “ The Arab spring or popular revolution” or any  misleading  mottos they have been marketing early in 2011 in Tunisia.

Mr. Anderson, for his part, said that the unilateral coercive measures adopted by Washington under titles like “sanctions” are illegal as international law bans economic coercion through  the principle of non-intervention in the UN Charter.

Anderson added that it is very essential to differentiate between the US so-called  “sanctions”  and the blockade war imposed on Syria, which both, at the same time, aim to subjugate Syria and other sovereign independent countries,.

He affirmed the illegitimacy of US economic wars against independent states which  violate all laws and International charters.

The Australian activist has concluded ceremonies of signing the two books at the 12-day Syrian Book Fair hosted by al-Assad National Library in Damascus.