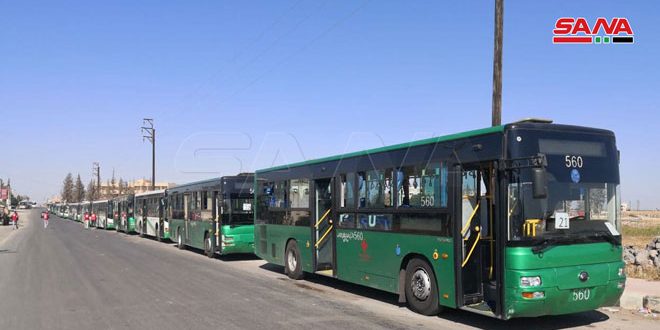 Daraa, SANA- The competent authorities in Daraa have completed all preparations to get a batch of militants, who reject the settlement agreement, out of Daraa al-Balad neighborhoods into the northern Syria. “Several large buses were equipped and a number of barricades and earth and cement barriers were removed in the old customs area in order to transport militants, who rejected the settlement, from Daraa al-Balad towards the northern Syrian,” SANA reporter in Daraa said .

On Thursday, the terrorist groups hindered the peace settlement agreement that the state put forward in Daraa al-Balad neighborhood after these groups retreated from implementing conditions previously accepted, foremost of which is the handing over the light and medium weapons to the Syrian Arab Army.