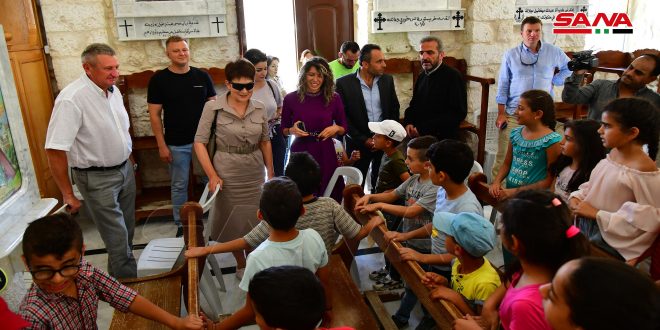 Damascus, SANA- A Russian delegation visited the city of Maaloula in Damascus countryside on Monday and provided food and health aid and school bags, in addition to a number of gifts for a group of children in the area at St. Elias Church and al-Baraka Center for Youth Activities.

In statements to reporters, Director of Social Affairs and Labor Department in Damascus countryside Hussam Sawwan pointed out that this initiative affirms the depth of the relations between the Russian and Syrian peoples and the continuation of Russia’s support to Syria in its war on terrorism and facing the difficult circumstances imposed on it.

Senator Sergei Muradov pointed out that the purpose of the visit is to bring joy to the hearts of children in the region after the difficult conditions they suffered during the years of war against their country.

From St. Elias Church, Father Elias al-Shayeb praised the initiative of the Russian side, “which drew a smile on the children’s faces,” explaining that the aid that was distributed met the needs of the locals in the region.