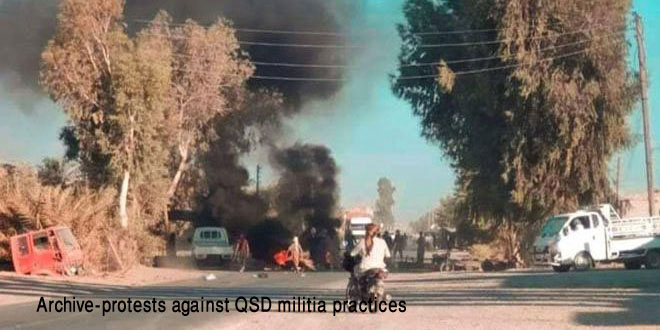 Deir Ezzor, SANA- A woman and a man were injured by fire of the US-backed QSD militia after it raided al-Baseera village in Deir Ezzor eastern countryside, and kidnaped a number of civilians.

Local sources told SANA reporter that QSD militia, in the framework of its suppressive practices, and with the support of the US air force, raided the neighborhoods of al-Baseera city in Deir Ezzor eastern countryside and they opened fire randomly on the locals as a man and his wife sustained serious wounds.

The sources added that while raiding al-Baseera city, the QSD militia kidnapped three civilians and took them to an unknown destination, meanwhile its militants set up checkpoints at the entrances of and streets of the city, and they prevented the civilians from walking and going to work and buying their daily needs.

On Monday, a woman was martyred by the QSD militia fire at the entrance of Tal Hamis town, south of Qamishli city, Hasaka countryside.