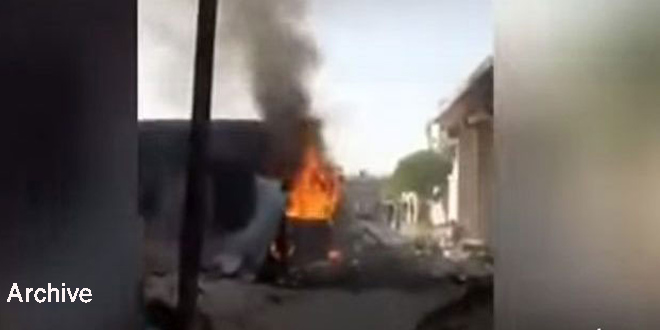 Aleppo, SANA- A civilian and a number of Turkish occupation-backed mercenaries of terrorist organizations were injured in an explosive device blast in the center of al-Bab city in Aleppo northeastern countryside.

Local sources from the city told SANA that an explosive device planted in a car parked near al-Ehsan Mosque went off in the center of al-Bab city, wounding a civilian and a number of mercenaries of the Turkish occupation from terrorist organizations and causing a material damage to the place.

In the areas controlled by Turkish regime-backed terrorist groups, chaos and insecurity prevail as a result of conflicts taking place between these terrorist groups and their leaders on imposing control over the occupied areas and the fate of civilians. Al-Bab city has previously witnessed several bombings with car bombs and booby-trapped motorcycles over the past months.