A young man from Homs revives heritage with his artistic works 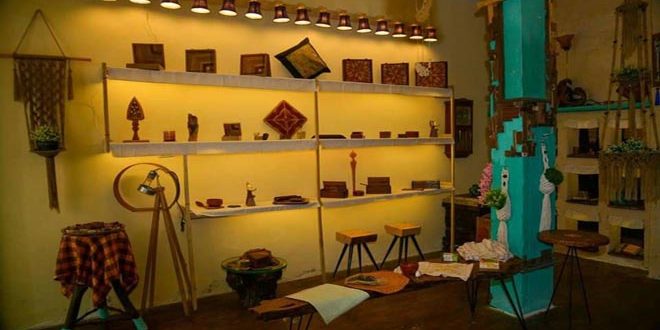 Homs, SANA- The revival of heritage is a distinguished project for a young man from Homs who mastered his work, loved it and believed in it, so success was his ally. Suleiman Sultan, thirty-four-year-old young man, told SANA that his project is dedicated to aesthetic matters, through artistic masterpieces that he makes with his own hands, in addition to reviving and recycling heritage.

“His work is based on handicrafts and strange ideas, and what encouraged him to go in this field and increased his love and passion is the profession of his father, who works as an Arab carpenter.”, Suleiman added.
Suleiman asserted that his work is carried out through his sawmill equipped with various types of small and large machines, as for the pieces he makes, most of them are in small sizes, and most of the marketing started through the Internet and ended recently with the opening of his own shop, “Bino”. He indicated that his works include various pieces made of wood, in addition to a number of products made from damask brocade that is unique to the city of Damascus and made of silk at a high quality level and all natural.

The young man pointed out that he used various types of wood such as walnut, raspberry, plum and others, in addition to seashells and brass, stressing his tireless work to expand his project, which reached other provinces where the demand for his work is very large.

He participated in many exhibitions such as Damascus International Fair and various exhibitions with several artists and he also worked for Syrian Company for Crafts of the Syrian Trust for Development.

2021-04-30
hybah
Share
Previous The occupation forces arrest a Palestinian in Jenin
Next Moscow: Statements of some countries about illegitimacy of presidential elections in Syria a new attempt to interfere in its affairs