Damascus, SANA-The annual conference of the Religious Endowments (Awqaf) Ministry concluded its two-day activities on Monday at al-Othman Mosque in Damascus, focusing on religious discourse for confronting sedition and takfiri and extremist mentalities.

The conference recommended launching the project of Fadela “virtue”, which calls for a group of discourses to consolidate the national and moral values and adopt them as a pattern for next friary’s discourses.

Participants in the conference called for speeding up procedures to develop curriculums of the religious education and follow up the positive and national role of al-Assad institutes for educating the Holy Quran.

The conference also appealed for working to consolidate the moral values for the coming generations and strengthen the role of religious media that adheres to the national identity.

It affirmed the need for monitoring any misleading, evil and takfiri fatwas which contradict with the right and correct Islam.

The participants demanded generalizing the national reconciliations and supporting the constructive dialogue for which all heavenly religions call. 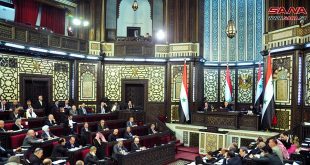