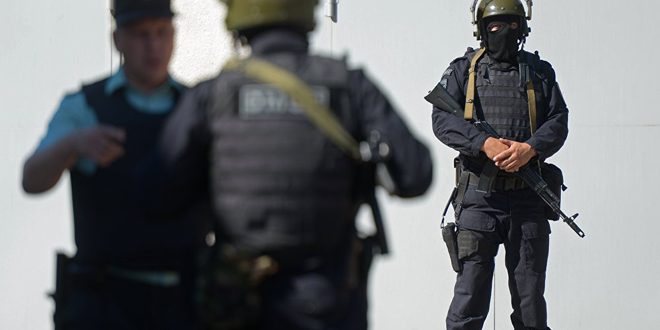 Tashkent, SANA- The security forces in Uzbekistan have arrested a terrorist cell that includes a number of extremists who have collected funds and sent them to terrorist organizations in Syria.

The press service office of the Territorial Administration of Syrdarya region said in a statement today that the Ministry of Interior and the State Security forces arrested a number of extremist terrorists who established a group on the Telegram website and were collecting funds for allegedly restoring mosques and homes of those affected by the floods in the Sardoba area, but they sent them to Syria to support Terrorists in it.

The statement indicated that two of the organizers of this group were promoting the extremist ideas of terrorists among the population and through social networks.

Law enforcement agencies in Uzbekistan stated that some of the detained terrorists were planning to go to Syria after canceling the quarantine restrictions due to Coronavirus and joining the ranks of terrorists there.

Uzbekistan: Arresting members of terrorist cell that finances terrorists in Syria 2021-01-21
ruaa-jazaeri
Share
Previous Antonov : Russia and US could cooperate in Syria on condition of respecting Syria’s sovereignty
Next Cold weather prevails as temperatures drop back