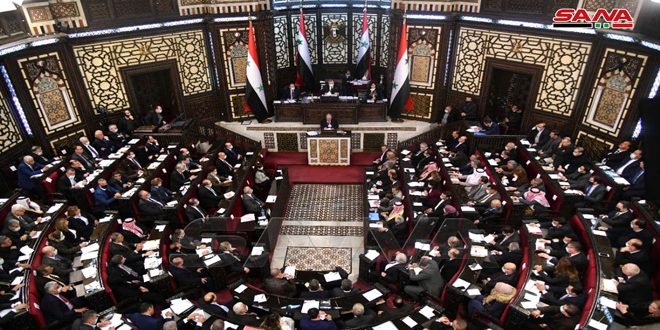 Damascus, SANA- People’s Assembly stressed the importance of achieving new steps forwards to meet the needs and aspirations of the Syrian people.

During the first session of the third legislative term, People’s Assembly chaired by the Speaker, Hammouda Sabbagh, and with the presence of Prime Minister, Hussein Arnous, and a number of ministers, affirmed that the Syrians are increasing steadfastness and making progress towards the final victory and peace throughout the Syrian territory.

In turn, Premier Arnous said that the Syrian people is still suffering from sanctions and unilateral coercive measures imposed by the US-led West which imposed a harsh situation on the Syrians.

He clarified that the forces hostile to Syria continue following tight restriction and blockade and imposing more economic sanctions against the individuals and economic Syrian institutions, the most recent of which Caesar Act that included all the parties worldwide that deal with the Syrian State, on top, the companies of the friendly countries ,adding that this unjust US Act extended penalties to vital Syrian institutions without which the Syrian State can’t secure the necessary requirements of food, medicine or clothes.

Arnous pointed out that the state knows the amount of challenges and difficulties it will face due to the sanctions and what they have left of bad effects on the Syrian citizens and which coincided with the negative impacts of coronavirus epidemic on the livelihood, social and economic conditions.

He went on saying that the fires that inflected four provinces increase the amount of challenges to be a new form of war against Syria.

Prime Minister confirmed that the State’s institutions worked to face these pressures despite the amount of destruction and huge sabotaging that inflected the different service and economic sectors, saying that we all agree that servicing the citizen is our joint target and that securing the highest standards of decent and honorable life is from the rights of citizen who has been suffering from the impacts of this terrorist war that our country has been still facing for the tenth year.