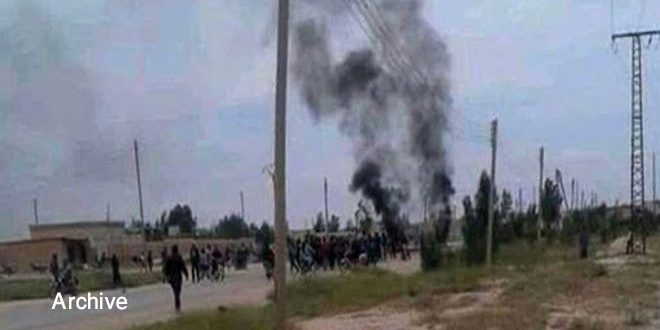 Raqqa, Hasaka, Deir Ezzor_ The US-backed QSD militia continued their crimes against the people in the areas they occupy in the Syrian Jazira, as they launched raids against villages in the countryside of Raqqa, Deir Ezzor and Hasaka and kidnapped a number of civilians.

Local sources reported to SANA that militia QSD raided the city of al-Tabqa in the countryside of Raqqa and kidnapped two civilians, taking them to an unknown destination to put them in its training camps to fight in its ranks.

The sources pointed out that militia QSD also kidnapped three civilians in a campaign of raids on a number of homes in the neighborhood of Mafraq al-Jazra, west of the center of Raqqa, and took them to an unknown destination.

In the countryside of Hasaka, local sources told SANA reporter that militia QSD launched a campaign of raids against a number of villages in the vicinity of Markada town, south of Hasaka, and kidnapped a number of civilians from these villages.

On Saturday, militants from QSD kidnapped a number of young men from Tal Barak district and its villages in Hasaka countryside, with the aim of forcing them to fight with its ranks.

The militia also kidnapped many of its civilian workers in different areas and drove them at gunpoint to training camps to force them to fight in the ranks of the militia.