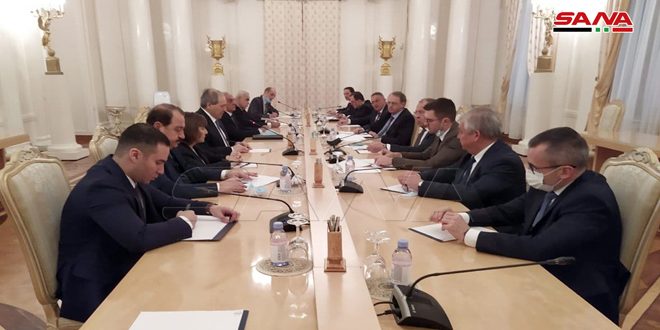 Moscow, SANA- Foreign and Expatriates Minister, Faysal Mikdad, on Thursday described as deep and strategic the relations binding Syria and Russia, stressing the importance of moving forwards in enhancing them to serve the interest of the two friendly peoples and countries.

Mikdad pointed out, in the prelude to his meeting with his Russian counterpart Sergey Lavrov in Moscow, that his visit to Moscow aims at discussing means of strengthening bilateral relations in implementation of President Bashar al-Assad and Russian President Vladimir Putin directives.

Mikdad thanked Russia for standing by Syria’s side in its war against terrorist, indicating that the two countries’ strategic goal is to move forwards in enhancing distinguished relations between them.