Damascus, SANA- A civilian was wounded on Wednesday in a terrorist attack employing an explosive device in Massaken Barzeh neighborhood in Damascus.

A source at the Police Command told SANA that terrorists detonated an explosive device that was attached to a car near Ibrahem al-Khalil mosque in Massaken Barzea neighborhood in the northern part of Damascus, injuring a young man and damaging the car.

On a relevant note, a mortar shell fired by terrorists landed in the Harasta suburb roundabout north of Damascus city, causing only material damage, according to the Police Command. 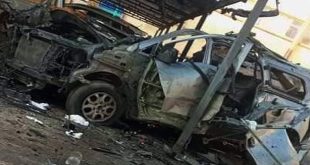