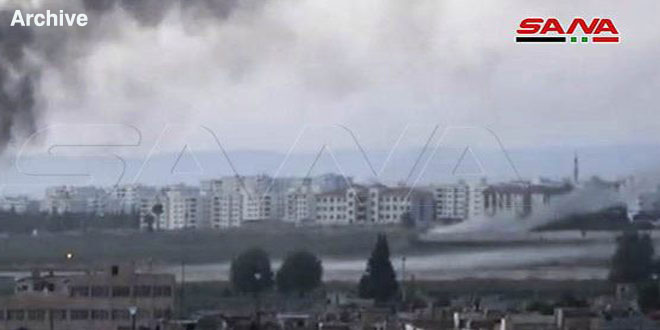 Hasaka, SANA- A damage occurred in the electricity network in Tal Tamir area in Hasaka northwestern countryside due to attacks launched by Turkish occupation-backed terrorist groups with rocket shells and artillery on a number of villages which caused a blackout in the area.

Director-General of Hasaka Electricity Company, Eng. Anwar al-Okleh said in a statement to SANA reporter that the terrorist attacks on a number of villages in Tal Tamir caused a damage to the line “20 K.F” in the area linking Tal Tamir and Abu Rasen, particularly in al-Mutasalita village.

Al-Okleh indicated that after assessing the damage due to the attacks, maintenance workshops will head for the village after securing their entrance to start to fix the damage and to bring the electricity back.

The Turkish occupation force and their mercenaries of terrorists continue their attacks against the infrastructure and the public and private properties such as burning the crops, stealing the agricultural equipment and vehicles and robbing the houses, in addition to cutting off the drinking water from Alouk plant repeatedly and attacking the electricity networks.

Damage occurs in electricity network in Tal Tamir due to a terrorist attack 2020-09-08
ruaa-jazaeri
Share
Previous Al-Moallem: Future of relations with Russia promising.. Borisov: Syria is subjected to economic blockade.. Lavrov: war on terrorism in Syria to continue
Next Israeli occupation arrest 50 Palestinians in the West Bank