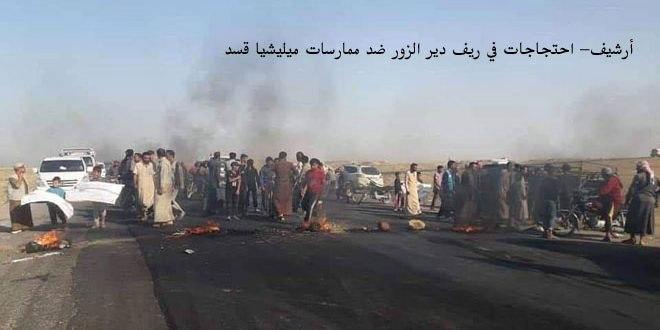 Deir Ezzor, Raqqa, SANA- One of US occupation-backed QSD militia positions and a vehicle affiliated to it were attacked by a grenade and an explosive device in the countryside of Deir Ezzor and Raqqa in light of the increasing popular rejection and protest against the practices of this militia.

Civil sources said that unidentified persons targeted with a grenade one of QSD militia’s positions in the town of Abu Hamam in Deir Ezzor countryside, causing material damage to the position.

The sources pointed out that a number of the US occupation-backed QSD militia gunmen were injured in explosion of an explosive device in a car affiliated to them in the surroundings of al-Hous town, east of Raqqa.

A number of QSD militia gunmen were killed or injured during the past few weeks after targeting their positions, vehicles and groups in the countryside of Raqqa, Deir Ezzor and Hasaka  in light of the increasing popular protest and rejection of their practices against the innocent civilians and  against looting the oil and resources of the region under the support of the US occupation forces.