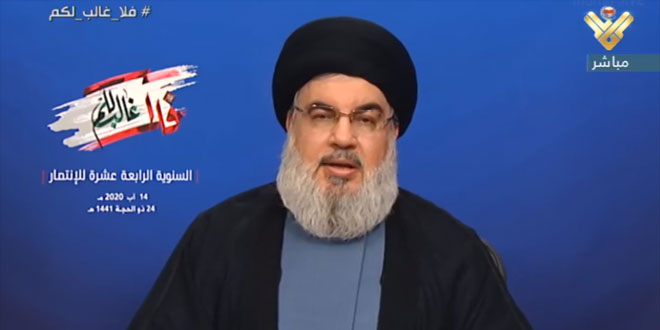 Beruit, SANA-Secretary General of Hezbollah, Sayyed Hassan Nasrallah, affirmed that the victory in July 2006   war foiled the New Middle East Project and US, Israeli plots that targeted the region, thanking Syria and Iran for their role to achieve the victory.

“We bless all Lebanese on the victory and thank all who played a role in making this steadfastness, victory legend and for all countries which stood by Lebanon particularly Syria and Iran,” Sayyed Nasrallah said in a speech on the 14th anniversary of July war victory over Israel.

He thanked the Syrian leadership and people for hosting the displaced Lebanese during the war.

Sayyed Nasrallah clarified that directly after the explosion of Beruit port, there were some sides who sought to topple the state, not the government, calling for the formation of a national unity government and if that is not possible, the government must contain the widest political representation.

He added “we call for a strong and politically protected government that is able to assume responsibility.

2020-08-15
m.eyon
Share
Previous Temperatures around average, misty hot weather in the eastern region
Next Four civilians martyred, five others injured in landmine explosion left behind by terrorists in aL-Tah village in Idleb countryside