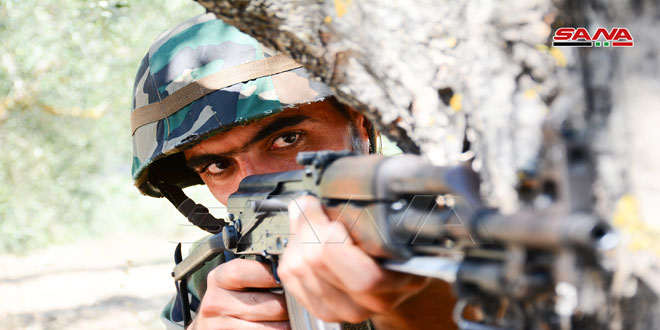 Lattakia, SANA- On the occasion of 75th anniversary for establishing the Syrian Arab Army, SANA reporter visited several military positions at frontlines in the fight against terrorist organizations in Lattakia northern countryside. The field Commanders affirmed that they will remain loyal soldiers who defend the Arab Nation and Syria, adding that the presence of the Syrian Army on the frontlines in order to confront the terrorists supported by more one hundred countries.

For their parts, a number of the soldiers stressed that they will be in a state of high alert on the frontlines to follow on the series of victories until crushing terrorism from the Syrian land completely.

The soldiers also affirmed their steadfastness in the combat fields will going on to defend not only Syria but also the Arab nation and all of humanity .