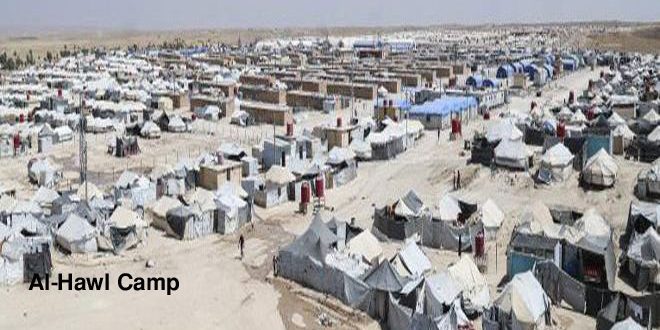 Hasaka, SANA- Local sources said that a number of Daesh terrorists have escaped from al-Hawl Prison in Hasaka countryside which is controlled by U.S.-backed Syrian Democratic Forces “SDF” .

The sources told SANA that seven terrorists from Daesh managed to escape from al-Hawl prison in the eastern countryside of Hasaka which is under the control of the US-backed “SDF”.

The sources indicated that SDF groups announced a state of alert to search for the fleeing terrorists.

On May 3, a state of chaos and insurrection occurred at al-Sinaa prison in Ghwairan neighborhood in Hasaka, which is under the control of “SDF”.

Al-Sinaa prison, supervised by the US occupation, holds Daesh terrorists of various nationalities.

2020-05-17
ghossoun
Share
Previous Thermal balloons dropped by US plane set fire to wheat crops in Hasaka countryside
Next Traffic accidents drop by 37.7 percent during period of curfew imposed due to coronavirus