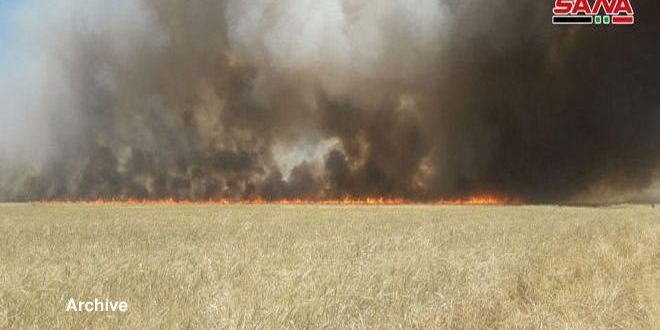 Hasaka, SANA_ A plane of the American occupation forces dropped a number of thermal balloons over the agricultural lands in the countryside of Shaddadi, south of Hasaka, setting off fire to wheat crops in Hasaka province.

SANA reporter quoted civil sources as saying that a US Apache helicopter on Sunday morning dropped a number of thermal balloons while flying close to the ground, setting a number of fires and burning more than 200 dunums of wheat fields in Adla village, in Shaddadi countryside, south of Hasaka

The sources added that the US occupation planes, while flying in the region, are carrying out provocative flights, as they approach very close to the homes of the people and the agricultural fields, causing panic and fear, especially among children.

During its illegal presence, the American occupation forces established bases in several areas in the Syrian al-Jazira, supplying them with weapons and logistic equipment through the illegal crossings with Iraq to reinforce their presence, steal Syrian oil, resources, and major crops.