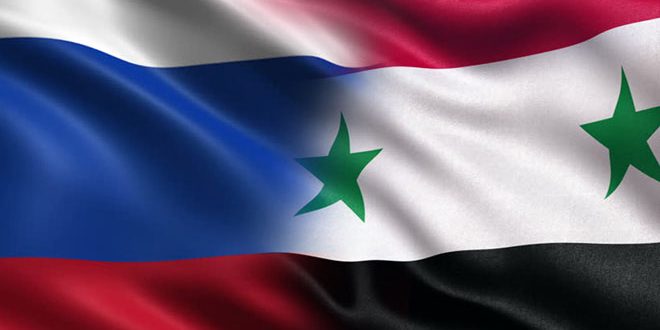 Moscow, SANA_ Syria and Russia affirmed that the illegal presence of the US occupation forces in the Syrian territories is the main obstacle which hamper guaranteeing the health safety of the displaced people in al-Rukban and al-Houl camps.

The Syrian and Russian Coordinating Bodies on the Return of Syrian Refugees, in a joint statement released Friday, warned of the danger of the novel Coronavirus(Covid-19) outbreak in these two camps.

The region occupied by the US forces in Syria, according to the two bodies, does not witness any control measures on the epidemiological situation at all as al-Rukban and al-Hol camps lack the medicines and qualified doctors and the health care centers do not operate there.

The two bodies renewed their call for the rapid evacuation of all those wishing to leave al-Rukban camp to their liberated areas where all conditions have been created to receive them, and steps are being taken to confront the spread of the pandemic.

“Despite the anti-Coronavirus measures taken by the Syrian state, which the World Health Organization (WHO) and other international health organizations have recognized as effective, the United States rudely continues to use the pandemic crisis to defame Syria and leads a media campaign to raise suspicion concerning its ability to effectively confront the pandemic spread in the country and hold it responsible for the worsening of the epidemiological situation in al-Rukban and al-Houl camps”. The two bodies concluded.

The US occupation forces are holding thousands of civilians in al-Tanf area near the Syrian-Jordanian border; thousands also reside in al-Hol camp in Hasaka, which is controlled by the US-backed “SDF” groups and suffer from a major shortage of life’s necessities.