Rehabilitation of phosphate factories in Khneifis and al-Sharqiya mines 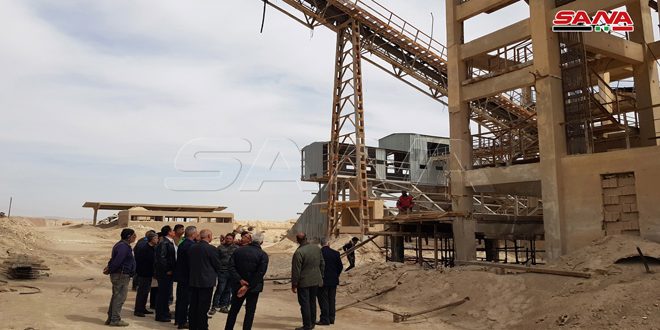 Palmyra, SANA-  The volume of the accomplished works of rehabilitating the Phosphate factories in Khneifis and al-Sharqiya Mines in Palmyra Badiya (Desert), which were damaged due to terrorism, reached 70 percent.

Director-General of the General Company for Phosphates and Mining Faleh Ayoub told SANA in a statement, that the rehabilitation works concentrated on the factories of drying the Phosphate to convert the soluble forms into dry forms

He pointed out that the value of the contract signed with the company which carry out the rehabilitation works reached SYP 11,950 billion, including SYP 8 billion for rehabilitating the phosphate washing plant.

Deputy Director of General Corporation for Geology and Mineral Resources, Osama Mahmoud, said that the Company works on rehabilitating the factories of phosphates mining which have been damaged due to terrorism in order to re-export phosphate for foreign markets.

For his part, Director of al-Sharqiya Phosphates mines Isam Dalloul said that all rehabilitation works are made with national expertise, asserting that a power transformation plant was established to provide the mines with electricity which contribute to accelerating the reopening of the factories and putting them into service.