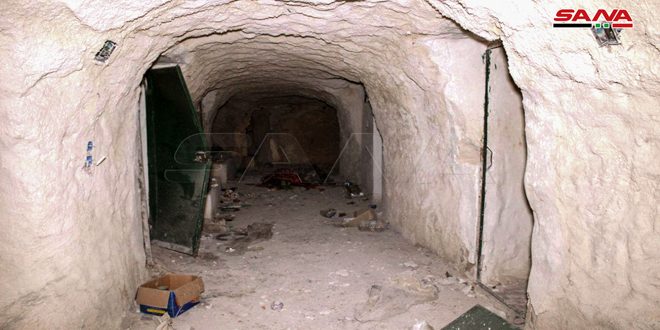 Idleb, SANA – While canvassing the areas and towns liberated of terrorism in Idleb’s southern countryside, Syrian Arab Army units uncovered a fortified underground base for terrorists and a network of tunnels in the village of Muqa and the town of Hish south of Maaret al-Numan city. 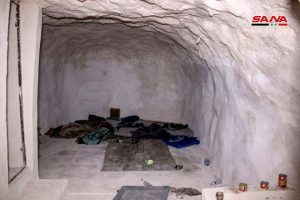 SANA’s reporter in Hama said that army units uncovered while canvassing the village of Muqa an underground base for “Jaish al-Fateh” terrorist group which is affiliated with Jabhat al-Nusra.

The reporter said the base, which was found in the northern outskirts of the village, contained command rooms, residential and sleeping quarters, ventilation shafts, a lighting and water network, storage facilities, and holding cells carved into the stone of a hill, all of which are connected by a series of tunnels.

The reporter also said army units uncovered a network of complicated tunnels in the town of Hish, consisting of vaults and narrow passages and living quarters beneath the southern part of the town.

Terrorists’ underground base in Muqa village