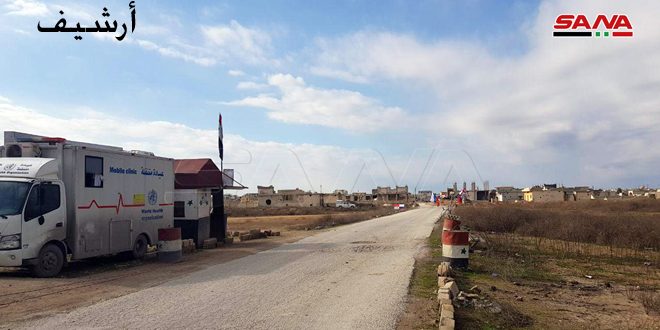 Aleppo/Idleb, SANA_ For the 6th consecutive day, the terrorists continue to prevent those who wish to leave the terrorist-infested areas via the humanitarian corridors in Abu al-Dohour, al-Habit in Idleb countryside and al-Hader in Aleppo southern countryside.

The terrorists used all criminal means to prevent those who wish to cross the corridors into the safe areas that the Syrian Arab army freed from terrorism.

SANA reporters in the three mentioned corridors said that the terrorist organizations continued, for the 6th day to exert pressures and threaten citizens not to get out through Abu al-Dohour, al-Habit, and al-Hader corridors in the countryside of Idleb and Aleppo into safe areas.

The terrorists, the reporters mentioned, are taking civilians as human shields to hinder the Syrian army’s progress in its operations to root out the remnants of terrorism from the areas where they are still positioned.

Over the past days, the terrorists intentionally sabotaged the side roads leading to the humanitarian corridors to prevent movement of the cars used by the people who want to get out from places of the terrorists towards the safes areas cleared of terrorism by the Syrian Arab Army.

In an attempt to prevent civilians wishing to leave, terrorist organizations have targeted the three corridors several times with rocket shells.

The reporters pointed out that the equipment and procedures taken by the concerned authorities in the corridors to receive those wishing to leave are still in full availability, as there are ambulances, a medical point and buses to transport the people and their luggage.

civilians prevent reaching corridors still terrorists 2020-01-18
ghossoun
Share
Previous Zakharova: US presence in Syria completely contradicts international law
Next Presidential decree forbids the use of anything other than SP as payment means