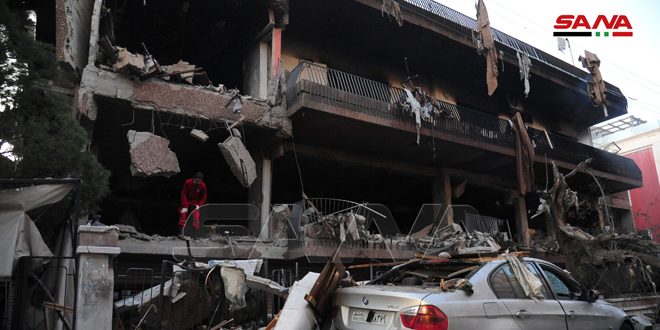 Damascus, SANA _ Two civilians were martyred and ten others were injured on Tuesday due to hostile missile attack on residential building in Mezza area in Damascus.

A military source said that at 04:14 of Tuesday dawn, November 12, 2019, Israeli warplanes flying over the occupied Galilee fired three missiles towards Damascus city .

The Syrian air defense systems, according to the source, immediately dealt with the attack and destroyed one of the hostile missiles before reaching its target.

The source added that the other two missiles hit the house of the Palestinian Jihad Leader Akram al-Ajouri in the western Mezza neighborhood, claiming the life of his son Moaz. Al-Ajouri’s daughter Batoul was also injured.

Civilian Abdullah Yousef Hassan was martyred in the attack and 9 others were injured also, the source said.

Earlier, Interior Minister, Maj. Gen. Mohammad Khalid Al-Rahmoun, during his visit to the targeted site, said that the residential building was targeted by several missiles, claiming the lives of a number of civilians and wounding others.

SANA reporter said that the building was badly damaged and the windows of nearby buildings and a number of cars were shattered.

The reporter mentioned that the Syrian Arab Army at dawn on Tuesday intercepted a hostile target over Darayya in Damascus.