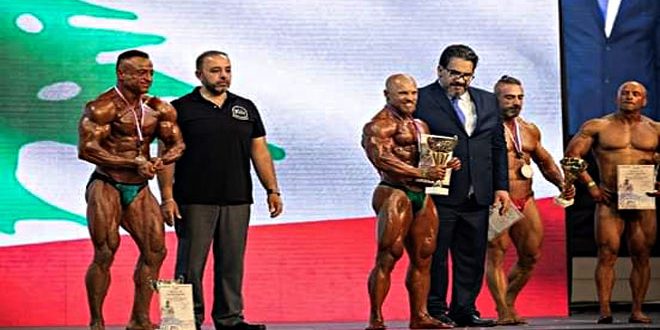 Beirut, SANA- The Syrian bodybuilding team won 13 medals; 5 gold, 3 silver, and 5 bronze, at the Diamond Cup Lebanon 2019 championship which has concluded its activities in Beirut on Monday.

Athlete Ali Karimo was ranked first as he won two golden medals in men’s classic physique for under 175 cm and champion of champions categories, while three other gold medals have been won by athletes Mazen Samrah in the men’s classic physique for under 175 cm, Samer al-Kouzi in the master bodybuilding over 90 kg, and Amin al-Hares in the  bodybuilding open weight category B.

In a statement to SANA, head of the Syrian Bodybuilding and Powerlifting Federation Manar Haikal hailed the Syrian athletes’ participation in the competition as they were able to raise the Syrian flag and win medals.

bodybuilding Lebanon medals Syria 2019-09-10
hala
Share
Previous Foreign tourists: What terrorists have inflicted on Palmyra is crime against humanity
Next Syria affirms solidarity with Nicaragua in its efforts to achieve stability in the country